ALL EYES ON CRAIGIEBURN 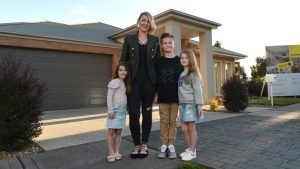 This week the Herald Sun put the spot light on our humble little suburb due to the record breaking prices being achieved and the incredible volumes of stock being moved.

Andrew our Director gave his insights on buyer trends and market movements and the reasons why the team has been so successful.

They conducted their case study on one of our many happy vendors Hollie Angelovski from Blackbird Tce who was floored by the enormous result achieved by the Craigieburn team last weekend.

The outer northern suburb has been among Melbourne’s busiest for auctions and total sales, with 925 properties changing hands in the year to June, according to CoreLogic.

Of that figure, 825 sales were houses, the third largest amount across the city.

Ray White, Craigieburn, director Andrew Bellino said affordability and quality amenities were drawing an increasing number of buyers in from as far as over state lines.

“There’s a good mix of first-home buyers, local buyers and also interstate investors, and we’re starting to get a few investors coming from the eastern suburbs as well,” he said.

“The growth and affordability are attracting buyers. There’s still a lot of anticipated growth in the area … and the proximity to the city — it’s less than 30km from the CBD.”

Hollie Angelovski said her family was “pumped” after the sale of their home in Blackbird Tce.

“The suburb’s changed massively. We lived next to cow paddocks when we originally purchased the block and have seen a massive transformation with tonnes of parks and new schools and a shopping centre over the time. There’s been a massive explosion,” she said.

TAKE THE FLOOR: ADD WOW-FACTOR TO YOUR HOME WITH THE LATEST TRENDS IN FLOORING